Listen to the voice in your head. I’ll admit it, I don’t always. However I did recently and it was a good thing. I was out a few weeks ago to watch and photograph the sunrise over The Bay of Fundy at a place called Cape Spencer on the edge of town.  Shortly after the sun broke the horizon, I finished shooting, then I packed up and started to leave. I looked back one last time to make sure I had everything and I saw one other possible spot to photograph. Initially I was going to ignore the idea and just head home but I thought, I’m here so I’ll take a look and see what happens.

It was a good day to listen to that voice in my head. The area of the cape I spotted was next to the water’s edge, and it was a steep climb down along some very sharp and very large rocks. I carefully made my way down and ventured onto the small islands of rock and continued to shoot as the sun climbed higher. 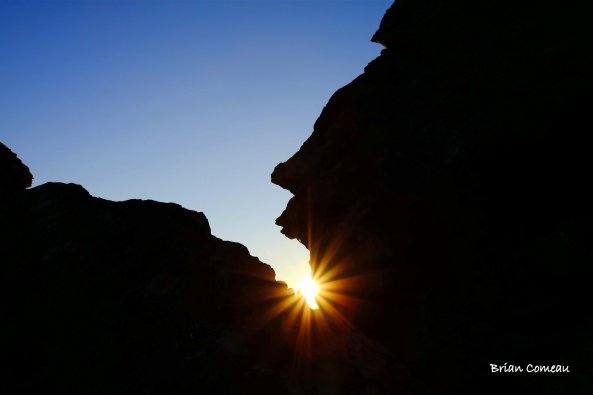 As I carefully manoeuvred around the rocks I noticed the interesting flare that developed in between and around the boulders. Unfortunately the break in the rocks was also in a place that I couldn’t position myself in front of because there was also a large gap in the rocks I was standing on and below the gap was the very cold bay. The live viewfinder is not something I use very often but it came in handy as I held the camera in my left hand while balancing everything and also trying to keep the horizon straight. 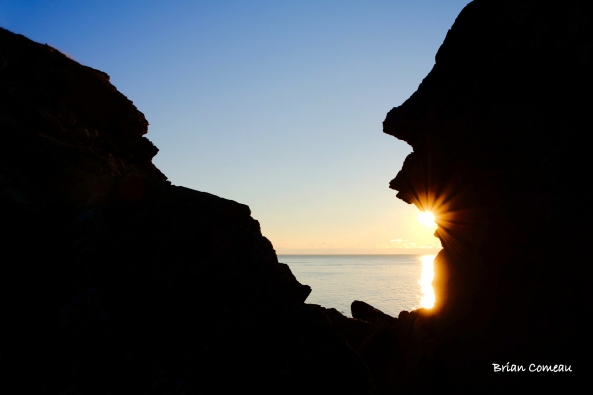 I like the above quote because it not only applies to a photographer but to life in general. I’ve heard it said quite often by photographer friends and even me that “I was lucky to get the shot”, when in fact there is generally a certain amount of preparation required, even if it’s just being there. Sometimes it’s that voice that puts us in the right place at the right time or just tells you to get ready.

I learned a valuable lesson that day. As much as photography is an art and there are principles to be followed there are also times we need listen to that voice inside prompting us to take a chance or to just show up. Since that day at Cape Spencer I’ve had more time to review my images and I’ve also had time to reflect on what else I learned that day. It got me thinking about that voice inside my head and how I should listen to it more often; with and without my camera. That voice may lead me to more unexpected photographs or it could also lead to more unexpected memories with my wife and kids, possibly a moment to even help a stranger. As we head into the Christmas season perhaps we all could take advantage of the opportunities given to us, just by listening to that voice a little more .

8 comments on “Look But Don’t Forget to Listen”