I’m not usually a news watcher but this week I was compelled to watch. Like many of us, I followed the path of Hurricane Sandy and the devastation that was left behind, especially in New York and other parts of the northeastern United States. I’ve spent a fair amount of time since the storm reminiscing about my first visit to New York City in 2005. I can vividly recall strolling through some of the areas hardest hit. I suddenly felt like “my problems” were insignificant relative to those that had just suffered the damaged done by this horrendous storm. 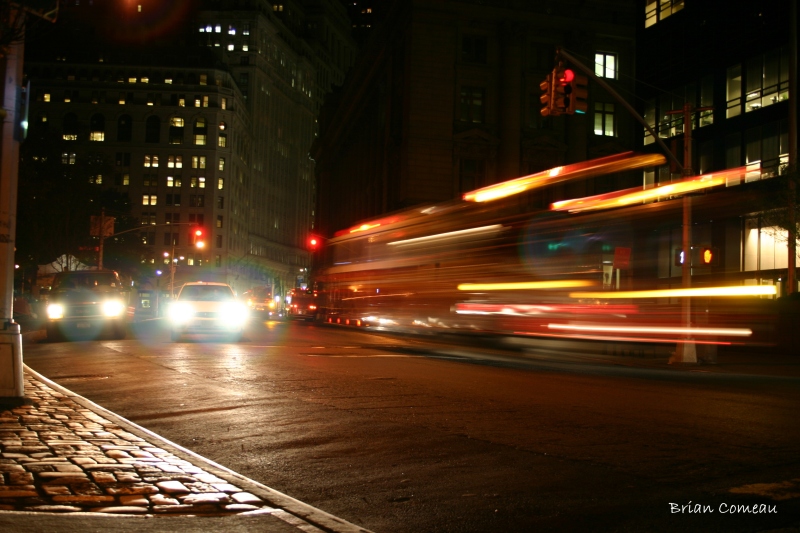 Some of New York’s finest in action.

Perhaps it was too much television, but when I was younger I thought of New York as a dirty and scary city, full of crime and people who wouldn’t give you the time of day. During my visit it became very evident just how wrong I was. Leaving a city of around 80,000 in Canada and finding my way to a city of 8 million proved to be more difficult than I anticipated, but the NY showed me how great of a host it can be. 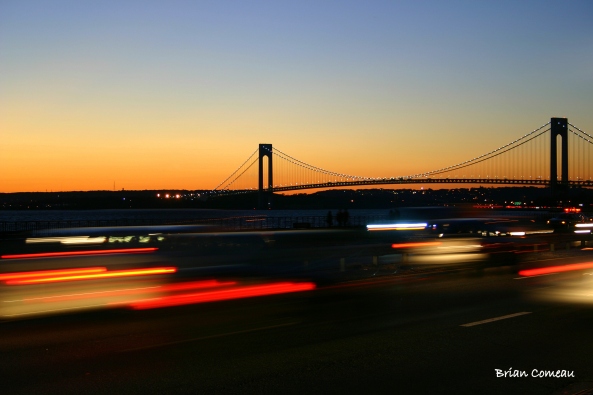 Staten Island Bridge from the Shore Parkway in Brooklyn

The night I arrived to NY city in 2005 it was dark, close to midnight and maybe sleep deprivation had set in which caused me to take a wrong exit. After an hour or so trying to find my way around I decided to ask a police officer for directions. When I drove up next to the officer and explained what I was looking for and asked where I was he exclaimed “You’re in Harlem”. My first thought was “this is not good”. I politely (and slightly fearful) asked for some help getting back in the right direction. After what seemed like a five-minute explanation from the officer, I quickly said, “I don’t think that is going to work”. Sensing my tiredness or perhaps anxiety he offered to let me follow him to the correct borough.

Once back on the right path to Brooklyn I thanked my new-found friend and attempted the rest of the journey on my own. Obviously still looking confused in Brooklyn, a car pulled up next to me and the driver rolled down his window. He ask if I where I was trying to get to. I gave the name of the hotel and he said he was an off duty police officer and to follow him. Thank you NYPD x 2. 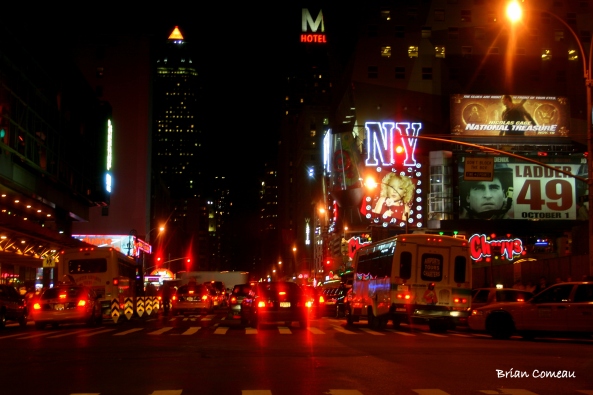 The majority of the five days and nights was spent working in Brooklyn but my coworkers who lived in the area did show me around parts of Staten Island, Manhattan and NJ in addition to my brief stopover in Harlem (although I didn’t plan that). Each day I was surprised by the hospitality shown to me by the people of NY. Not the cold, rude people who are stereotyped on TV. For my trip back home I decided to take one more drive through Manhattan by myself along with what felt like 1000’s of yellow cabs. I’m not sure if I would attempt to drive around Manhattan today, but back then after five days in the city I felt like I was among friends.

I still have many friends in NY city and around the surrounding area and I’m very relieved to hear that life is starting to slowly return to normal.  New York has shown incredible resilience over the years especially since 2001, and I know it will overcome Sandy too. You will continue to be in my thoughts and prayers in the coming days.

The majority of my photography is of nature, but when I’m looking for a change or visiting a new city, I really do enjoy taking photographs in the evenings and of the city lights. I’ve been lucky to be able to travel a little and even though it is not always to the big city I still always try to take advantage of the opportunity. 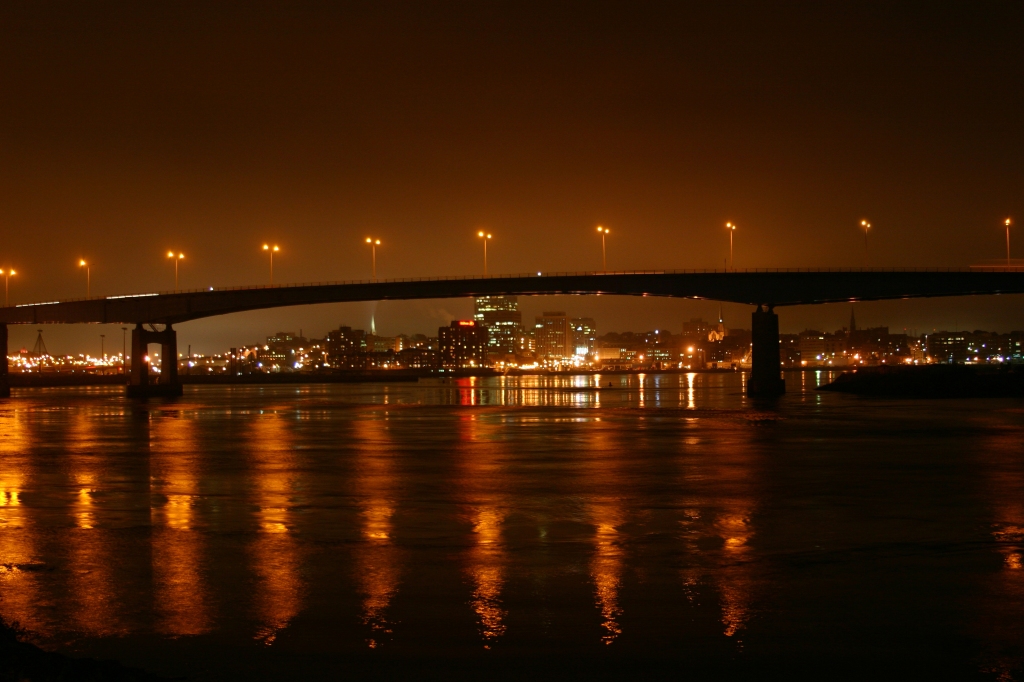 Even a small place like my hometown of Saint John or the surrounding villages can still provide some opportunities to capture a great image at night. Saint John isn’t very big by some standards, but the city center is very well lit at night and can create some nice reflections off the harbor such as this one of The Saint John Harbor Bridge framing the downtown area. 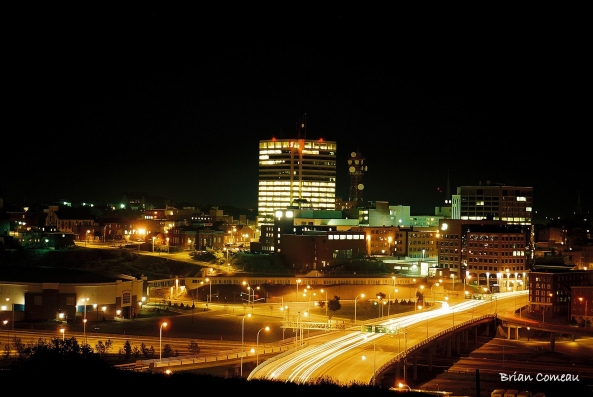 Along with looking for reflections on bodies of water I usually look for the chance to get a bird’s eye view for a different perspective of a city at night. Experimenting with longer exposures of 15 – 30 seconds allows me to record light-trails from the cars on city roads which adds a little life to night scenes like this one of my hometown. 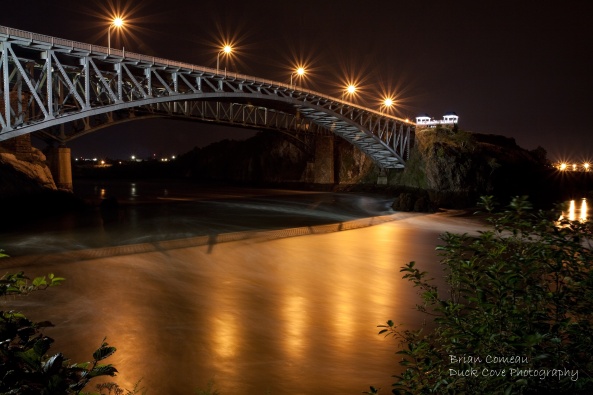 The world-famous Reversing Falls in Saint John attracts many tourists during the day but the view at night is just as impressive. This image of the falls and bridge was recorded with a small aperture to create the star effect with the lights and a long exposure to create milky looking water. 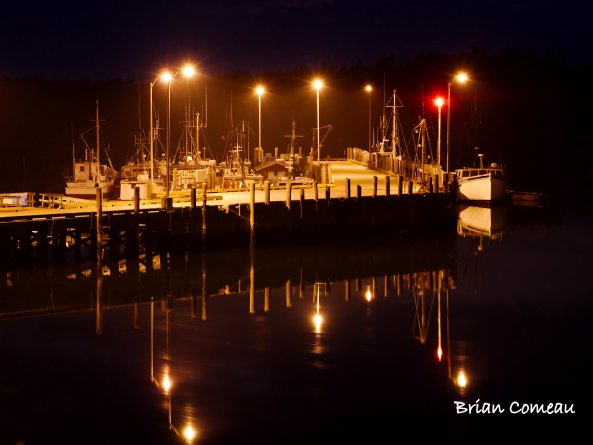 Even a small place in the middle of the Bay of Fundy like Deer Island can create a beautiful night-scape. Technically this is a morning-scape of these fishermen getting ready for work at 5am. Sometimes it pays to have insomnia. 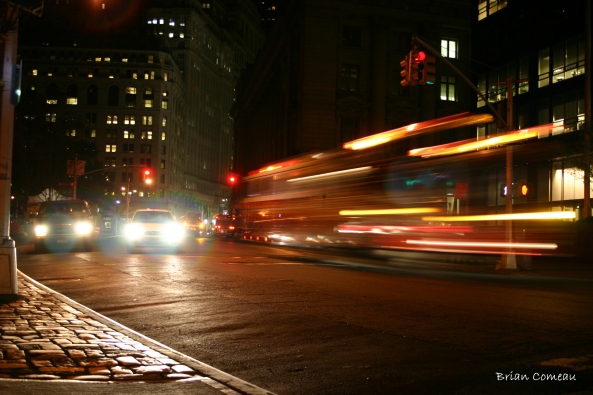 One of my favorite nighttime shots is from a trip to New York in 2005. While traveling home from Brooklyn I stopped for a few shots in Manhattan and the N.Y.F.D. were gracious enough to help me out. Fortunately I had packed my tripod and cable release on this trip and the sirens allowed me enough time to set up the shot. 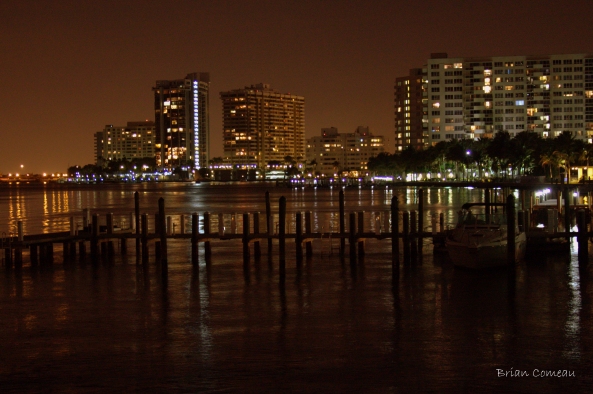 Although the travel arrangements don’t always allow for a full size tripod, a Gorilla Pod is the next best thing. This shot of South Beach Miami was taken by wrapping a Gorilla Pod around a fence railing and using a 2 second timer to record the image. 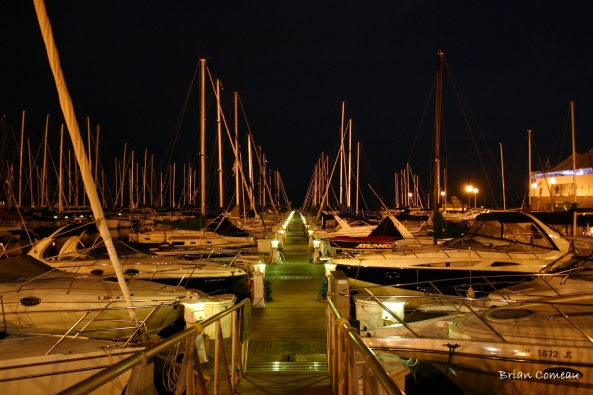 Sometimes when I travel photography isn’t the main purpose but my camera gear is still part of my luggage, so getting creative helps with night shots. A little Image Stabilization and the metal gate that locked me out of this Chicago yacht club was used for support and helped me capture this image of the illuminated boardwalk that separated these boats. 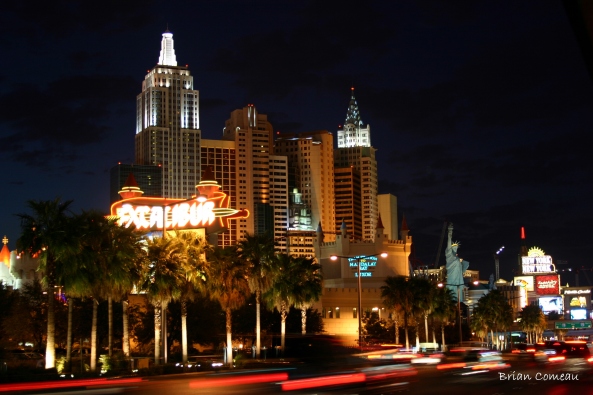 When it comes to taking picture of cities at night, there is likely no place like Las Vegas. Xcalibur is just one small part of what seems like an unlimited amount of neon in “Sin City”. 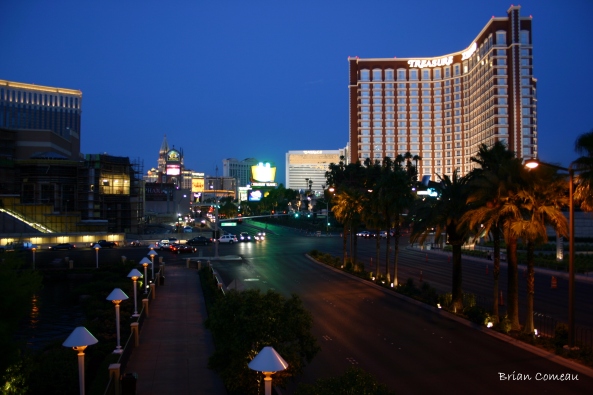 I’m likely in the minority but a week of the Vegas culture was long enough. I did enjoy the evenings and early morning photo shoots, and there was no shortage of night-scape subjects. Once again a railing and Image Stabilization saved me for this early morning shot of The Strip in Las Vegas. 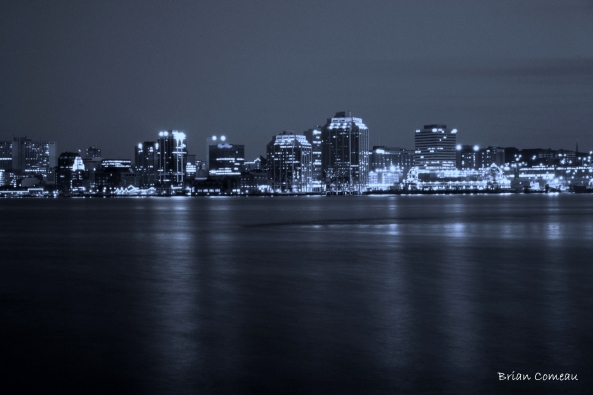 Back closer to home still offers opportunities for some fantastic night shots. One of my favorite locations in Nova Scotia is Mahone Bay, but on your way there why not stop in Halifax. For something different how about a monochromatic Halifax at night 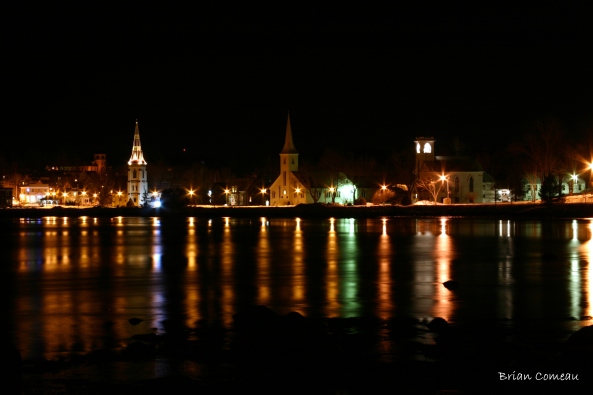 Even the small town of Mahone Bay Nova Scotia with a population of 900 has possibilities. The south shore of Nova Scotia is one of my favorite places to take photographs and the 3 churches of Mahone Bay are often the centerpiece for me.